The EeVe Forseti retro electric scooter has been unveiled at Auto Expo 2020. It is the brand’s fifth electric scooter, and is likely to be launched in mid-2021. EeVe claims it can reach a claimed top speed of 60-70kmph and a claimed range of 100km.

The scooter comes with a Bosch hub motor. For optimum braking prowess, it uses a disc brake on both ends. The Forseti electric scooter is likely to be priced at Rs 1 lakh (ex-showroom). When launched, it will go head-to-head against the Bajaj Chetak Urbane variant. 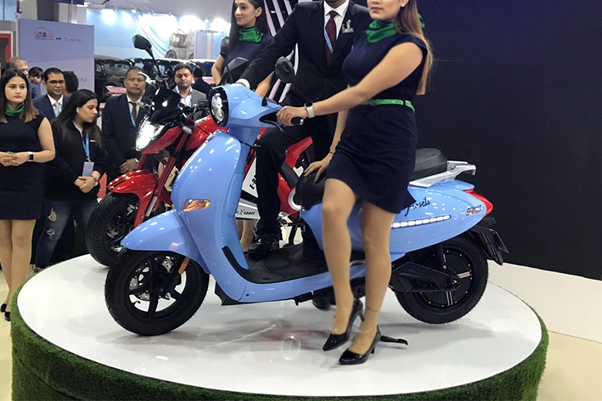 The brand made its debut at this year’s Expo and in addition to the aforementioned models, displayed its range of electric scooters which include the Xeniaa, 4U, Wind and Your. the Forseti Electric scooter which is retro-styled, yet, with modern touches, looks the part in that shade of Miami Blue. The Forseti claims a range of 100+ kilometres on a single charge and a top speed of 100 km/h. The neatly-styled scooter flaunts unique details like illuminated side panels, LED headlights and push-button release footpegs for the pillion. The scooter features a hub-mounted motor and gets twin springs for shock absorption duties at the back. The scooter gets disc brakes at both ends to handle braking duties. The company also claims that the battery of vehicles can be charged completely in 30 minutes. Other notable aspects of the e-bike include the LCD instrument console, inverted front fork and rear mono-shock. Other than that, the company also promises to offer a three-year warranty on the battery pack and a five-year warranty on the upcoming products with complimentary insurance for the first year as well. Eeve claims the battery can be charged in 3-4 hours and if you go for the optional fast charger, it takes just 30 minutes to juice up. Of course, this is a claimed time and we’ll need to test it before we can confirm this number. The manufacturer is also offering a warranty of three years on the battery and five years on the product itself.

But where and when can you buy the Forceti? Well, the company claims it has around 45 dealers in the eastern part of India and it is planning to expand soon. The Forceti will be launched by June or July, whereas the electric motorcycle will be launched by October this year.

The EeVe Forceti scooter is good for those who are looking for an alternative for stream lined scooters such as Activa, the price range is a little on the higher side but since it is an electric vehicle, on long term it gives lesser expense than a petrol or diesel scooter. The company gives guarantee for 5 years so whats there to lose? This is a good to go scooter!