In September 2019, Amazon became the first signatory of the Climate Pledge, which states that the company will be net zero carbon by 2040 across its businesses, competitively a decade ahead of the Paris Agreement’s goal of 2050 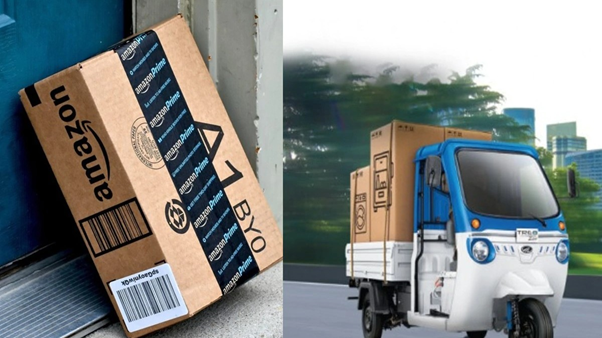 These electric vehicles are in addition to Amazon's global commitment to have 1 lakh electric vehicles in its delivery fleet by 2030, as stated in the Climate Pledge. Mahindra Electric will supply Amazon with Mahindra Treo Zor EVs, which have already been deployed in seven cities, as part of this collaboration. With Amazon India's network of Delivery Service Partners, these cities include Bengaluru, New Delhi, Hyderabad, Ahmedabad, Bhopal, Indore, and Lucknow.

10,000 Amazon custom electric delivery vehicles will be on the road delivering to customers worldwide as early as 2022, and all 1 lakh by 2030, in support of The Climate Pledge promise to be net-zero carbon by 2040. Several e-commerce behemoths have recently shifted their emphasis to using all-electric vehicles in their delivery fleets, taking a step forward in reducing their carbon footprint. Electric two- and three-wheelers are now available in India and are currently being used for distribution.

E-commerce companies not only minimise their carbon emissions, but they also save money because electric vehicles are much less expensive to operate and maintain. And if an EV breaks down, compared to a conventional fuel car, the time spent in the workshop is much shorter. In October of last year, Mahindra Electric Mobility Ltd launched the Treo Zor all-electric cargo three-wheeler in India for Rs 2.73 lakh (ex-showroom Delhi, net of FAME 2 and state subsidies). The Treo Zor is based on the Treo platform and is available in three different configurations: Pickup, Delivery Van, and Flat Bed.

The new Mahindra Treo Zor is said to save over Rs 60,000 per year in maintenance costs as compared to existing diesel cargo three-wheelers, thanks to its maintenance cost of just 40 paise per km. The vehicle's IP67-rated electric motor has a power output of 10.7 horsepower and a peak torque output of 42 Nm.

"The partnership between Amazon India and Mahindra Electric is a welcome step, which reaffirms India's significant progress in the e-mobility industry and highlights the role of auto makers and e-commerce companies to achieve our environmental sustainability goals," said Union Transport Minister Nitin Gadkari.
"We are confident that the government's efforts to encourage the adoption of electric vehicles in the country, and steps taken towards setting up of infrastructure backed by policy measures will help more companies adopt e-mobility," he added.
The Mahindra Treo Zor was launched in October 2020 and provides an advanced Lithium-ion Battery and ease of charging, making it easy for delivery partners to charge the vehicles in various locations.

Mahindra Treo Zor was launched in October 2020. It features an advanced Lithium-ion Battery and ease of charging. This in turn meets charging requirements of delivery partners. Designed and developed in India, the company says it offers best-in-industry performance. Other features include drive by wire tech to encourage fatigue free driving experience, reduced load and unload times, and a long wheelbase that fosters vehicle safety and stability. Principles of Clean mobility depend on clean energy to address climate change. Mahesh Babu, MD & CEO, Mahindra Electric Mobility Ltd said, “We are proud to partner with Amazon in deploying Mahindra Treo Zor EV in their delivery partners’ fleet. Treo Zor offers a unique customer value proposition with best-in-industry power of 8 kW, and highest-in-class payload of 550 kg.”