All about the Apple Car Launch in India

When will the much-awaited Apple Car launch in India? The project which was a secret is out in the world. Reportedly known as "Project Titan", Apple's car project is highly awaited by all the Apple and the tech lovers. 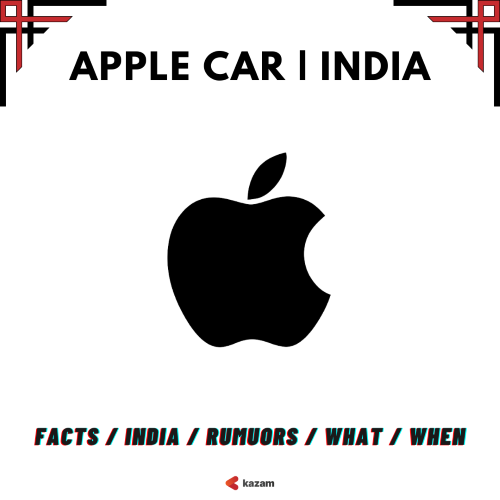 What about Apple Cars? Everything Facts

Among all the new and exciting projects, Apple is indeed working on a car-related project.

It all started in 2015, from the thought process, designing and manufacturing. The idea came into existence when Apple was in talking terms with Tesla to work on cameras of the car. It created a buzz and the process of iCar or Apple cars commenced.

The name of the big project is Project Titan. An automatic electronic automobile. The manufacturer of the car remains unclear.

The January 2021 Bloomberg report quoted below indicated that the Apple car is nowhere near production stage and "Apple will take at least half a decade to launch an autonomous, electric vehicle because development work is still at an early stage". This suggests we won't see anything until at least 2025.

Pieces of evidence that make it transparent that Apple is operating on an automated car:

Indian Automobile EV: Kia and Hyundai won't be partnering with Apple to manufacture the cars. The price might vary depending on whether Apple India would manufacture or import the cars in India. Apple did lay off 200 employees to give the project a new start in 2016.

It would have been in 2024, due to the pandemic the project got delayed. As of now, Tim Cook hasn't made it official. Yet, through various sources i.e. interviews, employees, former employees and, more we can state that iCar will commence production in some years.

What will it look like? Beautiful, elite, sleek and classy. It won't compromise anywhere in terms of accessibility and feasibility.

We can expect the launch in India in 2027. One of the competitors Tesla already registered itself in Bangalore, India in Jan 2021. We can expect Apple to enter the automatic electric car industry in India too.